5 trends to watch out for in the gaming world!

السابق التالي
5 trends to watch out for in the gaming world! 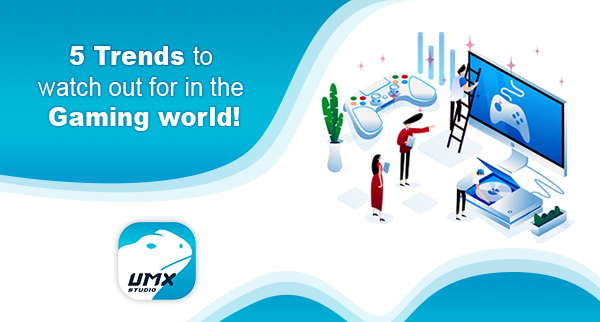 It’s a great time to be a part of the gaming industry. The time has gone when you would be berated by your dad for spending ALL of your time gaming. Now professional gamers are a thing and are raking in a lot more cash than your typical parent-friendly jobs. Moreover, professional gamers are now considered athletes in their own right (not the most muscular but hey at least they have powerful thumbs). In fact, they often go through rigorous training in state-of-the-art facilities and utilize tech and analytics to improve their performance. The gaming superpowers of our time are constantly striving to create, enhance, and optimize more adventures to send straight to your phone. Wondering what the new year has in store for us? Here are five of the biggest emerging gaming trends to keep your eye on.

Both AR (Augmented Reality) and VR (Virtual Reality) are unique in that they offer a level of user engagement unmatched by any other platform. They wow users by immersing them in a simulated yet incredibly life-like digital environment. From Google’s 2018 unveiling of their ARCore platform, to Harry Potter: Wizards Unite AR game in 2019, to Apple’s current launching of ARKit, the biggest AR platform in the world, it seems that many brands are depending on AR to stay relevant. Experts predict that global consumer spending on VR/AR content is going to reach around $6.5 billion in 2020, $8 billion in 2021, and over $170 billion in 2022. And considering that all we need to enjoy all these new games is a smart phone and a mobile app, AR/VR will be more accessible than ever.

Let’s do a quick 180 and talk about what could be considered the polar opposite of AR/VR technology: hyper casual gaming. As opposed to the complexity and holisticness of AR/VR games, users are amused by the lightweight, basic features of hyper casual games. With no tutorials required, it provides an easy breezy instant gameplay experience for the user. The competition in the hyper casual gaming arena is growing as more and more gaming companies enter in search of fun, straightforward games for their users. One of our most popular games is hyper casual! Check out Kick King for android and for IOS!

3) The Rise of Social Features in Casual Games

One of the most downloaded games of this year was “Among Us”, a game that tests the skills of logic and deduction. One of the key features of Among us is that its multiplayer, you can play with your friends or with random players across the world. You can chat and meet new people.There have been cases of people finding love on Among Us too! (Gen Z, amirite?). Other popular social games have features where users can send each other items, compare high scores and game progression, and participate in guild tasks and competitions during gameplay. UMX Studios most popular games Crashing Sand Dunes (CSD) and King Of Steering (KOS) have adopted social mechanics such as multiplayer mode, text and even voice chat and we expect to see even more casual titles jumping on the bandwagon in the months to come. After all, life is more fun when you can share it with friends!

UI (User Interface) and UX (User Experience) are a necessary part of developing an engaging game. They determine the attractiveness of a game’s digital graphics and are an essential part of drawing in more users and providing them with an entertaining and aesthetically pleasing gaming experience. Games that are internationally known for their fantastic UI/UX make up some of the world’s most popular apps, such as Angry Birds, the Candy Crush Saga and Subway Surfers. Impressive advancements in UI and UX are expected to dazzle mobile gamers in 2021.

Contrary to what anti vaxxers and conspiracy theorists will have you believe, 5G will NOT be used by governments to mind control you. Infact according to CNN, it’ll increase the speeds of your current internet by almost times 100!  Adoption is predicted to go global in the near future. In 2019, Samsung and many other smartphone companies unveiled their first 5G phones, to the delight of the public. Apple is following suit, reportedly preparing to include 5G in its premium iPhones this year. According to Ericsson’s latest Mobility Report, global 5G smartphone subscriptions will reach 84 million by the end of 2020 and 645 million in 2022. With 5G accessibility, streaming apps and games without wi-fi while out and about will become even simpler and faster. The international spread of 5G internet may also prove to be further incentive for the growth of AR/VR technologies.